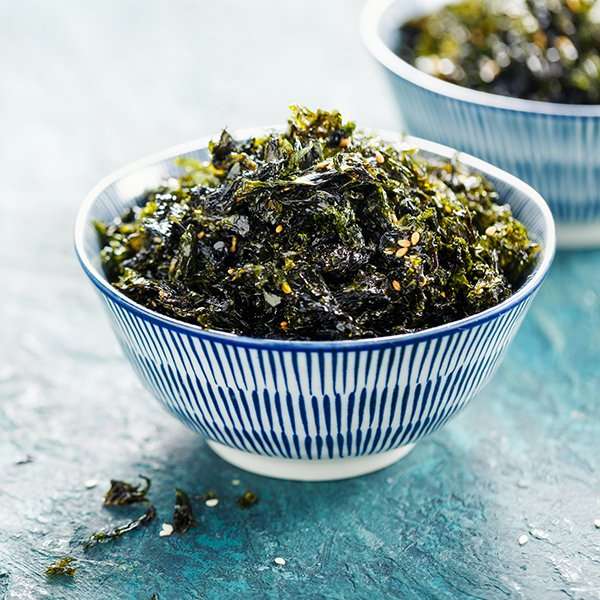 I’m taking you back to the side of that cliff, where I was pretending to love heights and hiking with my crazy aunt. Remember she had just handed me a seaweed snack? Really, I needed a helicopter rescue squad, but I took the seaweed, because what did I have to lose?

We eventually hiked our way to flatter ground and I was able to ask my aunt what the deal was with seaweed.

First of all, seaweed has long been a staple of many Asian diets, which is why I am not familiar with it; since my diet staples consist of  french fries, ramen noodles, mac & cheese and soda (now replaced by kombucha! Baby steps, friends, baby steps.)

My aunt told me that seaweed is packed with vitamins, minerals, calcium magnesium, iron and iodine and is a good source of protein and fiber.

After we got off the mountain and returned to my aunt’s house, she pulled out a variety of seaweed and showed me the differences. I learned that seaweed comes in many shapes, sizes and textures. And, there are way more ways to eat seaweed than just wrapped around sushi.

Most people are familiar with the seaweed and it is often referred to as the “gateway” seaweed because it is ubiquitous in the form of seaweed snacks and sushi rolls. It can come toasted and sprinkled with salt. It is high in omega-3 fatty acid, which is often hard to come by from a plant source and is known for providing the most nutrition of all seaweed.

Known as kombu, this is used in the base of miso soup. Kelp noodles are a staple in Korean cuisine. My aunt adds kombu when she soaks her dried beans because it breaks down the sugars in the beans that can cause gas. I was astounded to learn that 100 grams of kombu contains 710mg of calcium compared to 100 grams of milk which only has 110mg of calcium. A great vegan source of calcium!

This slippery, bright green seaweed is mainly used in most seaweed salad dishes. All seaweed is high in iron but my mind was blown when I learned that 100 grams of Wakame has 6.1mg of iron compared to the same amount of spinach which has only 2mg of iron. And here I thought spinach was the king of iron. Popeye take note, seaweed can kick spinach’s butt!

In a nutshell, I learned that seaweed is healthy and easy to add to different foods that I already (or will start to!) eat. But I also learned that seaweed not only benefits my body but also the planet. Popeye and Superman take note, this seaweed stuff is a powerhouse of goodness!

Here are a couple of eye opening facts about seaweed and the planet.

The more I learned about seaweed, the more I felt like I was discovering a secret treasure chest overflowing with gold coins and jewels. This humble little weed of the sea has mighty powers that can benefit humans and the planet. Wow! You learn something new every day.

Is there such a thing as a “seaweed evangelist”? I want to be one, for sure!

Again, thanks to my auntie who has now clued me in on the wonders of kombucha and seaweed. I have to say, I wasn’t expecting to learn anything on my spring break excursion. I was looking forward to being a lounge lizard, but I am totally inspired to be daring and try some of these new delicious foods.

At dinner that evening, after our day of hiking, I was ready for a treat. I was thinking something chocolatey, rich and dense. Maybe a good, gooey brownie or chocolate chip cookie. I had earned those calories after trudging up that mountain!

My aunt said she had just the thing to satisfy my sweet tooth.

I am jazzed about seaweed, but I still need to indulge every now and then.

She brought out homemade carob cookies. Where’s the chocolate? I almost started to have a tantrum, a throwback to my childhood days; I was seriously dreaming about that oozing chocolatey goodness! Don’t make me stomp my feet and scream!

She said not to worry. Life is full of new surprises, and carob was one of them.

Don’t miss the next blog where we dive into the misunderstood child of the dessert world, carob!

Anyone taking thyroid medicine should talk to doctor before adding seaweed to their diet https://www.medicalnewstoday.com/articles/323916#takeaway