Under Maintenance – We will be back sometime in June. 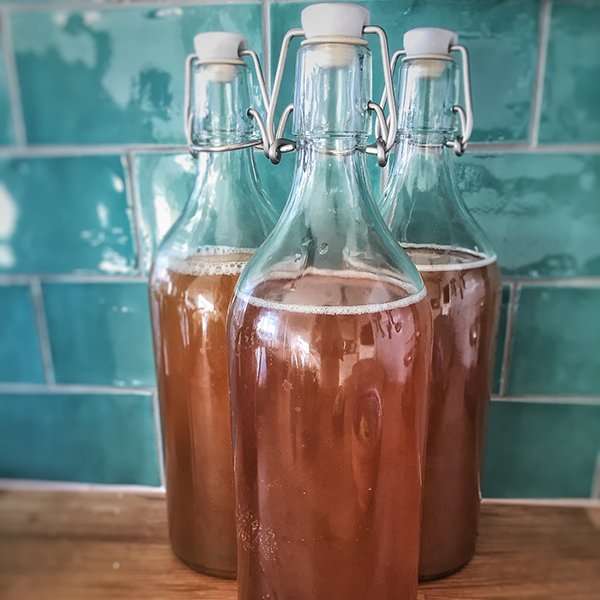 Everything You Ever Wanted To Know About Kombucha

I have a crazy aunt that totally takes the world by storm, she is my hero!

Let me emphasize the crazy, it is a good kind of crazy; she loves to hike big mountains and swim in frozen lakes. She is daring in a good way; always ready to take on the next great challenge, bursting with energy and possesses a never ending glow of goodness.

My aunt is one of those people that you just want to decode; you know, try to figure out what makes them tick. I often think she must have a secret source of power, maybe a super power?

I spent spring break with her last year and learned quite a bit. She doesn’t possess a super power but employs a combination of life choices ranging from interesting (or some may call crazy!) food selections to exercise and a powerful mental mindset. I had to share a few of the crazy food tidbits that I learned. They are just too good to keep to myself.

My aunt’s beverage of choice is Kombucha. Not soda or energy drinks, but this sparkling, fizzy flavored drink that you pronounce “Kom-BOO-cha” not “Kom-but-cha.” I was skeptical at first, but when she explained what it was, and then I tasted it, I was hooked. Especially when she told me about the SCOBY, not to be confused with Scooby-Doo, the cartoon dog.

Think of the SCOBY as the powerplant of the kombucha. SCOBY stands for, “symbiotic culture of bacteria and yeast” and it aids in the fermentation process of kombucha. It is a gelatinous mass of alien goo. It seriously looks like something that could spring to life from the bottom of the sea.

Fermentation is essentially the fizzy bubbles which are created when the sugars are turned into alcohol or acid. Other fermented foods that you may be more familiar with use this same fermentation process; kefir, sourdough bread and ginger beer all require symbiotic cultures to get their bubbly, tangy goodness.

A SCOBY is added into sweetened black or green tea where the bacteria and yeast in the SCOBY break down the tea’s sugar into alcohol, carbon dioxide and acids. The tea ferments for one to four weeks and the result is a fizzy, tangy, sweet and vinegar-like drink that can be flavored with fruits, juices or herbs.

Is Kombucha Good For You?

While I was spending spring break with my aunt she kept hounding me to kick the soda habit. She said the soda I was drinking was packed with sugar and other unidentifiable artificial chemical concoctions. She told me that many kombucha drinks are only about 30 calories with 2-8 grams of sugar, just make sure to read the label!

Various health claims abound online regarding kombucha but experts say to scientifically prove many of the claims directly related to kombucha, more controlled studies are needed.

An article in Discover Magazine reported that some studies have found associations between fermented food and improved health, but these do not definitively prove the link between kombucha and the claims of gut health due to probiotics. The same article said that the microbes in kombucha have not been confirmed to even be probiotic or beneficial.

Scratching head…hmmmm….how to decipher all of these claims? Answer: Ask the aunt!

Why I Drink Kombucha

My aunt said, similar to many foods that are surrounded by marketing claims, the key lies in going back to the basics of how the food is made, how much sugar it contains and how many ingredients are included.

These simple facts can help inform my food intake decisions. So, here is what I boiled the kombucha conundrum down to:

So, my conclusion is that while the scientists are researching claims of probiotics, cancer cures and gut health, I’m going to drink my “booch” because:

So, after I finally sorted out the kombucha question, my aunt threw me a new curve ball.

As we were on one of her favorite, steep and rocky long hikes, (picture me petrified, attached to the side of a cliff) she whips out a snack and starts chomping away on some dried, greenish, black thing.

That does not sound appetizing, does it?

She offered me some, and I found it slightly salty and a little less crunchier than a chip.

Not bad, I asked her what it was.

She told me it was seaweed.

What? Weeds from the sea?

Like I said, never a dull moment with the adventurous aunt!  Stay tuned for the next blog, on you guessed it, seaweed!

Español
We use cookies to ensure that we give you the best experience on our website. If you continue to use this site we will assume that you are happy with it. Thank you!AcceptPrivacy policy